My wife Barbara and I were watching TV the other day and, as always, we had the closed captioning on. I insist on this because I believe there is something wrong with our sound system that causes dialogue to be less than discernible.

So we’re watching Homeland, and the caption says “(Doorbell rings)” and I remark to Barbara that there was no doorbell ring, and how would anybody know there was someone at the door if they didn’t have closed captioning, to which Barbara replies that she clearly heard a doorbell ring and that maybe I should consider some sort of hearing assistance device.

This coming from someone who cannot hear her phone ringing unless she already has it in her hand.

“Maybe the doorbell was outside my range of hearing,” I said. After all, I have no trouble 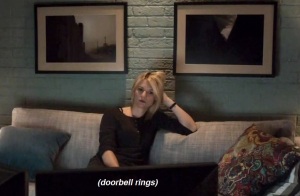 hearing our doorbell, so maybe the crazy CIA lady on Homeland has a higher-pitched ringer on her door.

“You should get your hearing checked,” Barbara said. And she added, since I was about to go visit my mother in Florida, that I could go where she got her hearing devices, which was a local flea market.

I planned on ignoring this suggestion, since every phone call I have with my mother consists mostly of her saying, “What did you say? I’m losing you. You’re fading…” until I just hang up.

I should mention that my resistance to hearing aids is not a matter of vanity. I’m well aware that current audio assistance technology has reached the miniaturization point where hearing aids are not visible unless someone sticks their eyeball in your ear. And, besides, anyone who sees me in my usual attire can tell you that looking good is not a big priority for me.

On the other hand, I really don’t want any more devices in my life. For the time being, at least, I would rather miss a word here and there than have something else to charge, program, update, upgrade, sync, adjust, clean or hold extended warranties on.

Besides, I’m told I will become a grandfather in June, and that there will frequently be an infant in our house, so I’m thinking that a bit of hearing impairment might be a good thing. That way, when Barbara asks me if I changed the kid’s diaper, I can plausibly reply that I didn’t hear her crying. (“She must be just outside my range of hearing,” I will say.)

I figure there’s one other advantage to somewhat faulty hearing. No less a person than

Yes, such is the state of our federal government that we have deaf senators named after puffs and chickens. But I think I am like most Americans in preferring not to hear my president use “s…hole” language. And if forgoing hearing aids is the sacrifice I have to make, well, it’s a small price to pay.

But maybe I’ll renew my Costco membership after the next election.