In my last post, I told you about how an Italian doctor and a Chinese doctor are teaming up to transplant a Russian’s head onto a body of unknown nationality.

This is either a gigantic step forward for diplomacy or the plot of the next James Franco/Seth Rogen movie.

For many people, the first image that comes to mind with this sort of thing is that of Boris Karloff lumbering 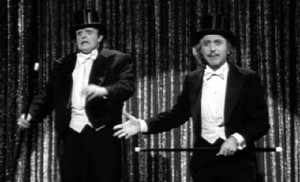 toward a bunch of torch-bearing villagers, or, for my family, Gene Wilder and Peter Boyle singing “Puttin’ on the Ritz.”

But, when you think about it, once you’ve moved various organs from one person to another, and once you’ve done face transplants, why is head swapping so much more horrifying? I mean, if you put my head, with all its memories, and thoughts, and neuroses onto, for example, Channing Tatum’s body, would I not still be Mark Hallen, albeit with a much smaller pants size and possibly some neck stiffness?

Ah, but we, as a society, watch too many science fiction and horror films. So any advance causes us to worry about the disastrous ramifications. Nuclear energy brings Godzilla from the depths of the ocean…space exploration invites alien invasions…genetics results in mutants and killer tomatoes…brainwashing technology leads to Fox News.

But, not to worry. The head transplant is at least two years away. Meanwhile, there is a group somewhere in Europe that’s taking an entirely different approach to causing the apocalypse.

It’s called The Human Brain Project, and this is its mission statement:

Understanding the human brain is one of the greatest challenges facing 21st century science. If we can rise to the challenge, we can gain profound insights into what makes us human, develop new treatments for brain disease and build revolutionary new computing technologies. Today, for the first time, modern ICT has brought these goals within sight.

To put that into words that you, with your primitive brain, can understand, they are attempting to create a human brain. In a computer.

To give you an idea of how polarizing this project is within the scientific community, Dr. Miguel Nicolelis, M.D., Ph.D. Professor, Neurobiology, Biomedical Engineering and Psychology and Neuroscience, Co-Director, Center for Neuroengineering at Duke University (he has a really large business card), believes the efforts are dangerously misguided. And he’s someone who has used brain implants to give super powers to mice. Really.

It’s always true that scientists don’t recognize the potential catastrophes lurking in their work. Think of it: almost all the technology we depend on runs on computers, and if a sentient computer gained access, it could do everything from driving our cars off cliffs to burning our toast to making prank calls with our iPhones.

But the consequences could be even more dire than that.

We’re assuming, because this artificial human brain will be created by genius scientists and housed in a computer, that it would be smart. But if it truly emulates a human brain, it could do all sorts of dumb things no matter how intelligent it was.

After all, even smart humans are prone to illogical superstitions and the types of emotionally-driven actions that cause otherwise sane men to hire marching bands to propose to their girlfriends in front of 80,000 football fans. What if this computer brain decides the number 13 is unlucky and erases it from…everything. What if it thinks Fear the Walking Dead is really boring and ruining the original Walking Dead and takes revenge on AMC by deleting every episode of Breaking Bad and Mad Men? What if it somehow gets…

Sometimes the tiniest thing can cause brain damage in humans, right? A neuron misfiring…a fall down the stairs…being tackled by a 375-pound defensive lineman. So what if clutzy Howie spills his energy drink on the keyboard and something short circuits? Or maybe this brain starts off damaged–kind of like the cranial equivalent of Windows Vista. 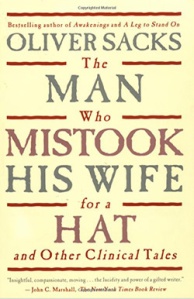 and can’t write a book about it. But what if there was a damaged brain that was connected?

You’re worried about your Ashley Madison account getting hacked now? Wait until you see what a lunatic artificial brain can do! You’re concerned about Kim Jong-un having nukes? What if an even crazier mind had access to every launch code in the world? You’re fretting about the possibility of Donald Trump becoming president? What if this deranged computer brain liked Donald Trump…and could hack into voting machines?